…having breathing problems ?
…suffering from a sudden allergic condition ?
…foreboding of something more serious ?

No, I’m not talking about my, the pilot’s heart here, although it missed a beat, too, in that moment.
No, it was my 170’s engine which showed symptoms… 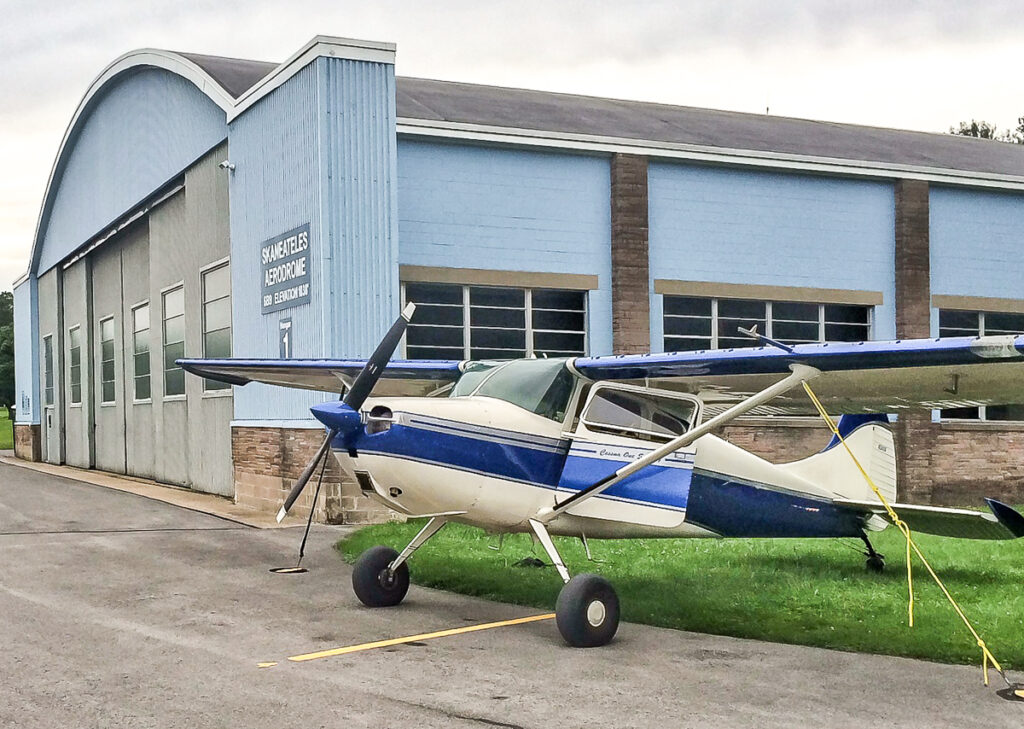 I had hardly tied down WhiskyBlu when a petite woman came running, dragged by a yapping fox terrier.
“ Don’t worry, he doesn’t bite – stop it Rusty!” she gasped, a bit out of breath, as if those words were her habitual greeting.

When Rusty and her had come to a stop she first looked at my 170, then at me and asked: “ Where are you from? You’ve got a beautiful plane, for sure.”

The ride down to Mainstreet Skaneateles was just long enough to mutually fill us in to our “who, where and what”.                  It turned out that my “camping under the wing” trip was like walking down the driveway to check for mail compared to what they were planning: crossing the Caribbean in a catamaran in order to temporarily relocate to Colombia…

A leisurely stroll through downtown and a delicious dinner at “Gilda’s” and I totally agreed with Molly when she talked about “..this quaint little town..” 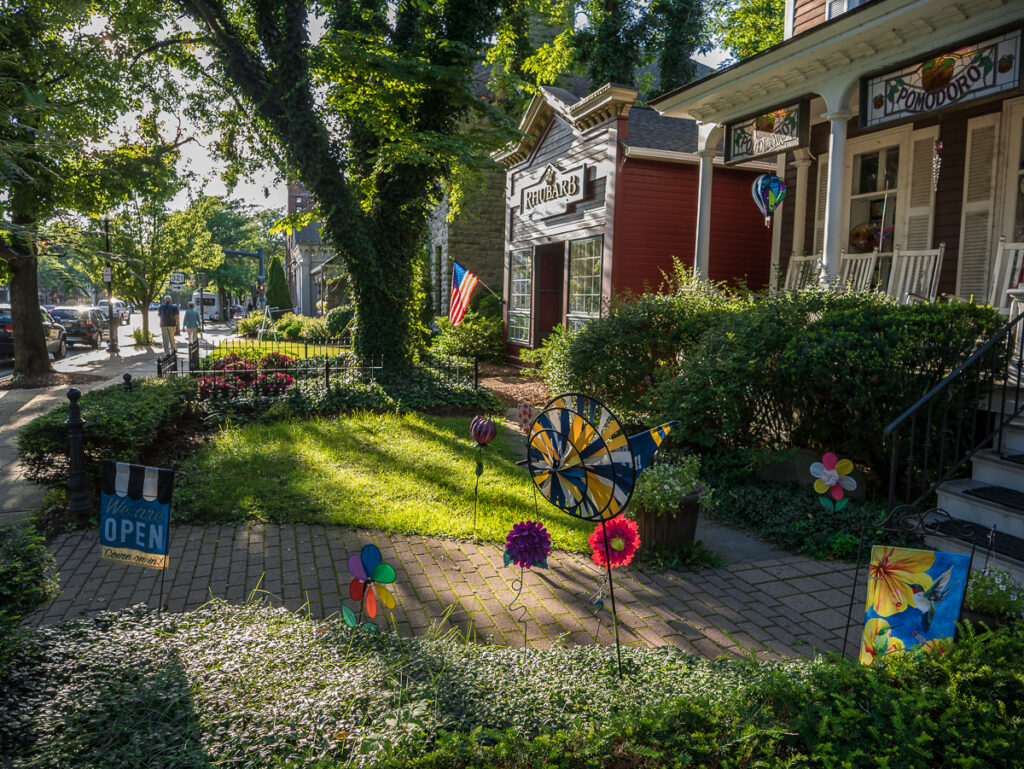 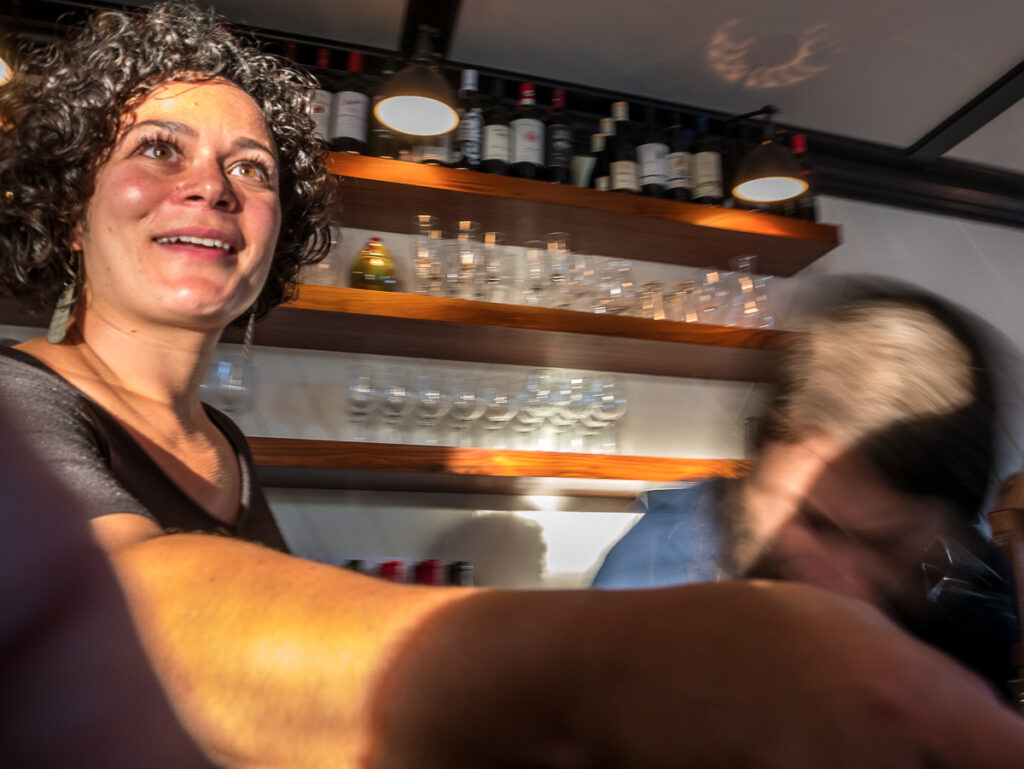 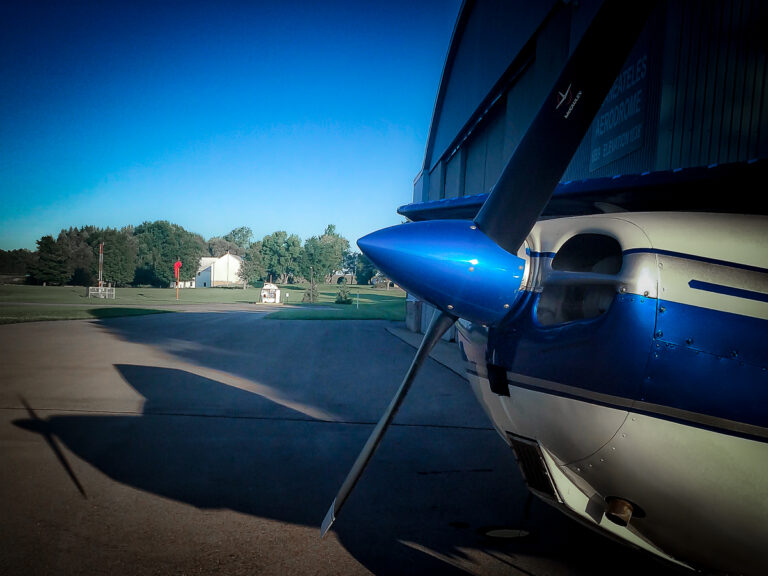 When I threw my first glance through the tiny bullseye in my tent the next morning it fired me right up: a severe clear morning sky played with the color of spinner and nosebowl of WB – “Rhapsody in Blue” for my eyes.

A cup of coffee, a bowl of granola, teardown of the tent, in hardly 30 minutes I had taken care of the preflight agenda.
Waynesville, OH was today’s destination, assuming that my friend John would give me the final “cleared to visit”. 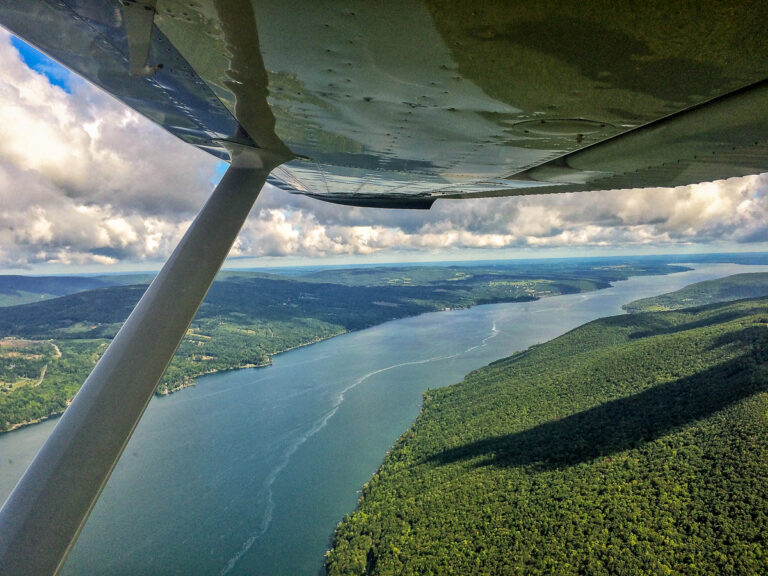 The 460 mile trip would require a fuel stop for which I had preliminarily selected Portage County Regional airport.

What a beautiful flight it was.
Early on I crossed some of the Finger Lakes, then I threaded my way between the rolling hills of the Allegheny National Forest and low flying cumulus clouds.
Sublime!

It was just about lunch time when I came to a stop at the fuel pump at Portage County.
A leftover slice of “Gilda’s” pizza, and water, coffee and a piece of apple pie from the friendly lady at the FBO and 45 minutes later it was the old routine: “clear prop” and push the starter.
Another 5 minutes later nothing was routine.
Why did the prop suddenly turn 200 rpm less?
Why that roughness in the engine?
What happened to the climbrate?

“…4VW departing runway 09 Portage” I had announced on the radio, pushed the throttle to its stop and monitored the engine instruments as the Cessna picked up speed. All in the green. Liftoff, positive rate of climb just passing 500 fpm.
Then it happened: the rpm dropped, the engine started to run rough, airspeed decayed. It felt like I had hit “molassic” air, heavy, viscuous, granular even, given the slight stutter of the combustion process, holding back the plane and suffocating the engine.
What the hell…?
I lowered the nose to maintain safe airspeed, which meant that my rate of climb went close to zero. At least I could maintain altitude and airspeed – as long as it didn’t get worse.
Which it didn’t, fortunately.
What next? Since my carb-heat check during run-up hadn’t produced any indication of trouble I didn’t want to run the risk of loosing even more power by checking again.
Still running, 60mph, maintaining altitude.
A shallow turn to crosswind to stay as close to the airport as possible. And yes, there were fields everywhere in case all went to shreds in seconds.

Still rough, maybe 30, 40 rpm gained, climbing ever so slightly..?
Fuel selector on both, what else?
Another 50 rpm more, climbrate improving to almost 100fpm!
On downwind now, was it really running smoother or was that just wishful thinking?
When I came to the point where one would turn base I saw 200fpm up and decided to leave the pattern but stay within glide range of the airport.
At this moment I started to relax some. Actually, I realized I hadn’t tensed up a lot, no panicking at all. Was it my soaring-ego which had made me believe that I could always put the bird in a field?
I made a note to admonish that ego: take the next opportunity to practice engine out procedures and dead stick landings again!
What should I do now? Land back at the airport and have a mechanic check the engine? This seemed like the most cautious course of action – but was it the only reasonable one?
Keep circling, observe engine parameters and performance and delay final decision?
Oh, we’re climbing at 400fpm now and the engine sounds much happier.
After 2 more minutes everything seemed back to normal, rpm about 2550, rate of climb between 400 and 500 fpm, all temperatures “as usual”.
What had happened? And more importantly: could it happen again?
To neither of those questions I had an answer.

Was that reason enough to wave the no-go flag?

For the smart, prudent and cautious pilot it probably would have been. For me the fact that “it” fixed itself was reason enough to be less cautious, more optimistic perhaps, and so I decided to venture out. To give myself more options “in case of…” I climbed as high as cloudbase and VFR rules would allow which turned out to be 6500ft, a proper altitude for my southwest bound leg.

For the next hour and a half my senses were on high alert: ears listening to the slightest change of engine sound, eyes racing back and forth between engine monitor and airspace around me, fingers ready to detect any unusual vibrations transmitted through the yoke.

But no alarms came in.

And all the while my mind was still trying to assess what had happened and how I reacted to it.
Yes, there were shortcomings in my response: it didn’t occur to me to pay attention to the engine monitor to detect anomalies in EGTs or CHTs (stuck valve eg…), neither did I check magnetos (sparkplug fouling/ignition troubles). Both could have helped in diagnosing the problem later.
OTOH I never stopped flying the plane and felt quite ok with my decisions regarding where to point the nose (again: glider pilot feels “at home” when there’s nothing but gliding to do…?).
So, do I get a C+ perhaps? 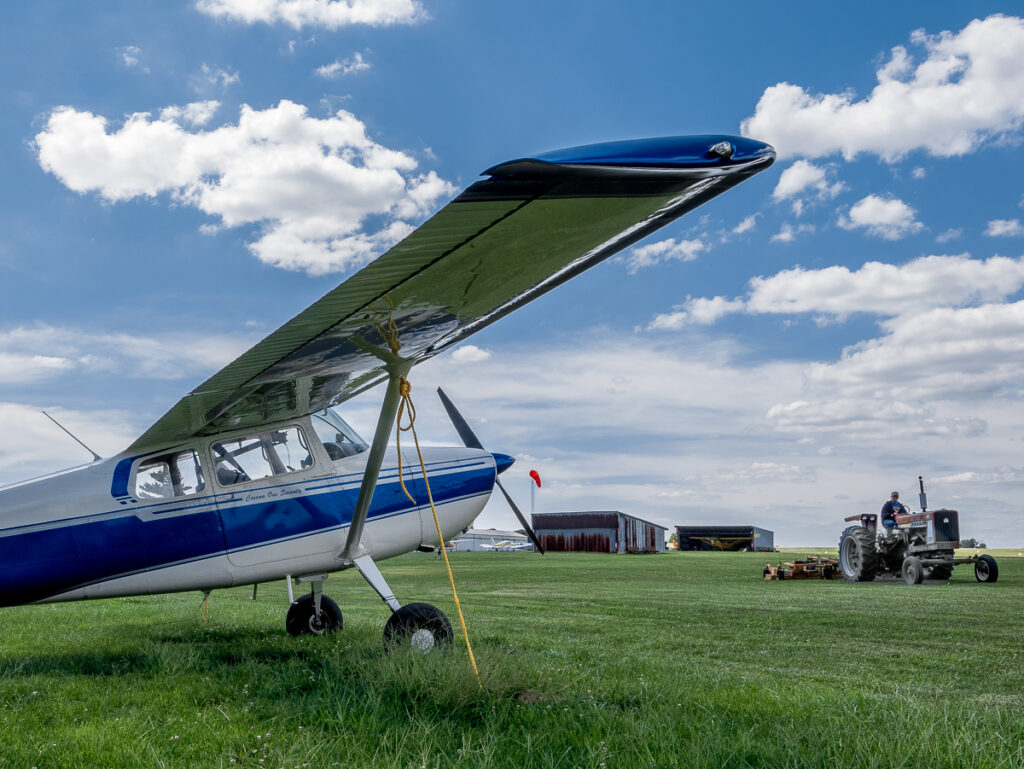 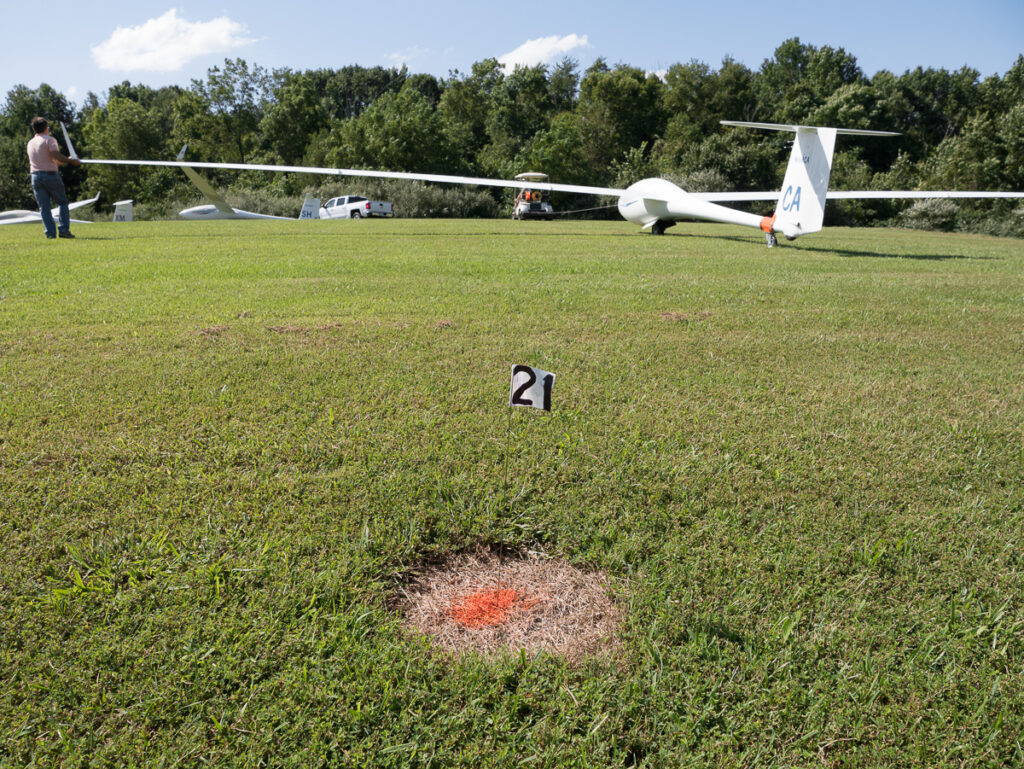 I spent the next morning at the soaring club helping to launch gliders, enjoying the comraderie of the pilots and worrying, from time to time, about what Cubbie would find.
“Compressions perfect, engine runs fine” that’s what he found! He didn’t offer a more detailed analysis. With only my anecdotal description of the event and an uneventful compression check there simply wasn’t enough evidence to come up with more than sheer speculations.

A relief, or what?

A rest of uneasiness accompanied me during the rest of my trip despite Cubbie’s simple conclusion: the curse of the unresolved “what” and “why”. During all my takeoffs I was on high alert: climbrate normal? rpm where it should be?… didn’t the engine feel more tired the closer I got to homebase? Or was it only imagination?

Little did I know that those missed beats were to profoundly alter our joint adventures in the foreseeable(?) future.